Shutting That Shit Down: 2018 In Review 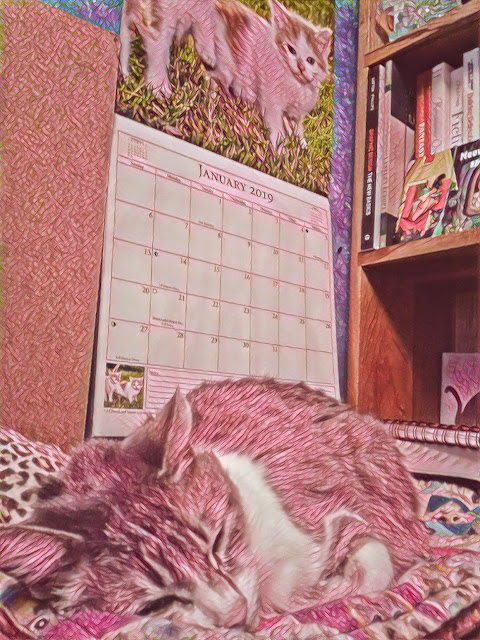 First off a Happy New Year and thanks to everyone willing to check in on Void Spaces.  With any article it feels great to know that you have an audience but in particularly these summations keep me honest about my hobby output so participation is especially welcome.  So how did we fare in 2018?

My SAGA project didn't happen this year.  I was able to complete my basic Saxon force augmenting the models I had painted in 2017 with more hearthguard and some bowmen but my enthusiasm waned terribly.  I finished up some test models for a second group of Irish and managed some accompanying terrain pieces but lost focus and moved on to some other projects in the course of the year.  I didn't get around to picking up the rule set and the whole thing fell into a hobby oubliette where it rests to this day.  It's definitely on hiatus but far from finished.  I like to think of projects like this as my pioneers.  Eventually my friends will catch the bug and when they become interested in particular projects my Dark Age warriors will be waiting for them and me.  In my circle of friends I've always felt like the slow painter although I'm to a point I'm thinking that might be a myth.  When I'm on point I'm deceptively prolific.  My hobby failing is that I'm easily distracted and prone to trading partially completed projects for others.  It works against me whenever I try to build armies so having a standing reserve force in a genre gives me some confidence and keeps me on task.

I looked at building a Soviet Army for an undetermined WW2 project.  Early in the year I presented one update on my progress but from a blog perspective it seemed to sneak into the realm of forgotten projects.  At the start I had purchased some Bad Squidoo and Warlord models then ordered some Black Tree figures to add to the mix further down the line.  I'm happy to report that everything is painted and the first Soviet armour is part of the inbound Christmas hobby haul.  My Soviet project was reinvigorated in late November because some friends expressed interest in Bolt Action and invited me along for the ride.  The success on seeing this goal through is a good counterpoint to my less than successful Dark Age/Saxon project.  It's great to be excited about a project and it can give me a good head of steam initially but it's invaluable to have other people who are excited too.  A cooperative hobby project benefits everyone involved.  More on that in 2019. 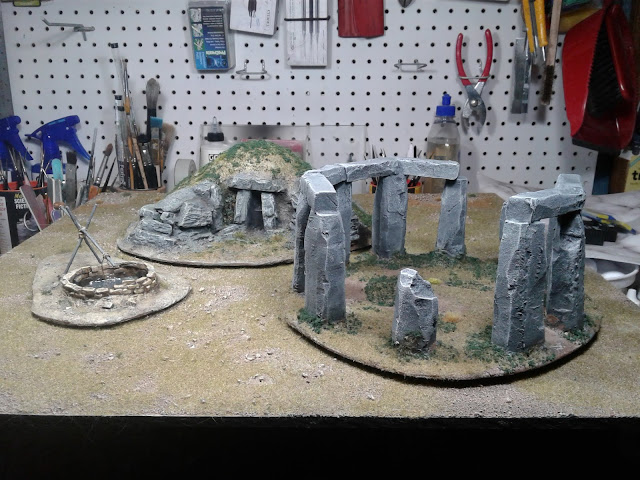 My terrain building efforts are a bit like my army painting efforts.  My goal was to build a cohesive terrain set for Dark Age games but as my interests moved away from that project the accompanying build project fell apart too.  I've had some doubts about how to proceed with larger gaming surfaces.  I don't mind the versatility of the 2x2 tiles I'd proposed then but as portable as they are compared to a single 4x4 that doesn't mean that much.  They are still a beast to store as they accumulate and still don't travel very well.   As for the canvas battle boards I never got around to prototyping them.  I have the materials and did a couple experiments with small parts of the project this year but failed to commit to a full sized surface.  I will admit that gaming mats are looking more attractive than I might have thought.  Honestly I don't like gaming mats with flat 3d features.  I think flattened trees and rocks or rubble look stupid on gaming mats.  I am becoming jealous of plain cobbled surfaces and may relent and push the button on ordering one in the near future.  I'd still like to know if I could use a terrain roller on partially cured caulking and make textured surfaces on a DIY roll-able gaming mat though. 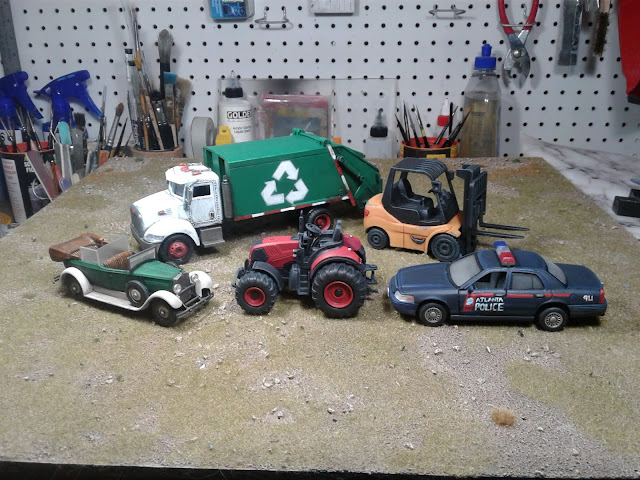 While large boards didn't work out I kept on with mini and scatter terrain pieces.  A barrow building article I posted over the summer proved to be my most hit entry to date.  It gets my vote for best results and best learning experience of the year as well.  I did some other small projects as well.  Some were intended for Dark Age or Low Fantasy settings while the others were Modern set pieces.  It isn't complete but I also built a police station for TWD and learned a few things about building construction that will pay off in the new year.

Speaking of TWD I was able to add 50 new figures to my collection including some conversions and models from other lines that scaled well with Mantic's range.  I painted most of the figures I had in the spring and didn't replenish my TWD painting queue until Autumn. 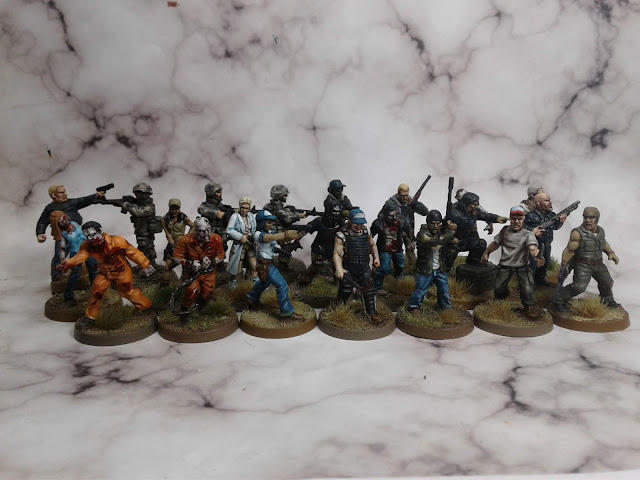 My batteries were running pretty low before I got excited about painting this wave of figures and the blog had suffered a bit.  I'd had some fantastic (for me) traffic during the summer and felt I was on a downslide.  I was but it shouldn't have bothered me as much as it did.  This proved to be the big test for my blogging resolution.  There were probably 2 or 3 articles I posted over the course of the year that felt like they were phoned in but for the most part I think it was a pretty good year on the blog content end.  I managed to stick to my minimum of two monthly posts and went a little further in others.  It felt like a good balance.  There were some months where it felt effortless and I literally held back material or just didn't keep a record of projects I had on the go.  At other times I felt I had to push myself and it really felt like a chore I managed just the same.  A good balance.  Also on the blogging front we passed 50k views.  Amazing :P  , and added as many as two whole followers.  Easy win. 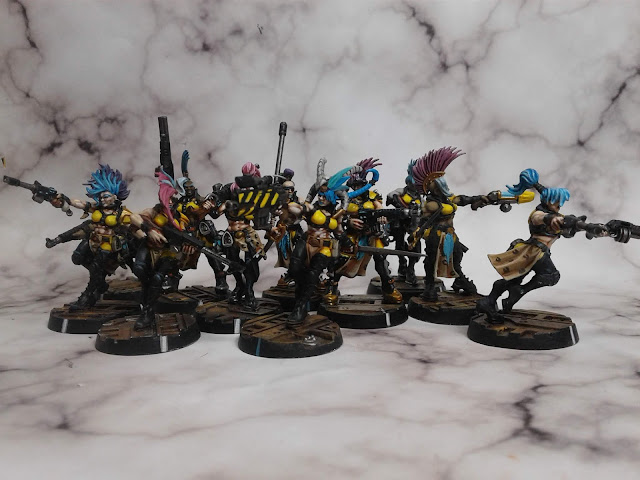 Painting of an Escher gang or participation in a Necromunda campaign wasn't part of my plan rolling into 2018 but I had a lot of fun growing my gang and felt I did pretty well all things considered.  Some day Dan will suffer for killing Mean Justine. 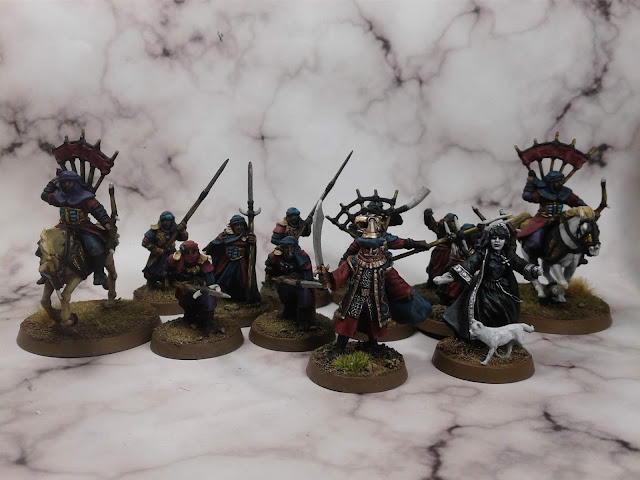 I also did an unscheduled bit of LotR painting.  I put some time into my Haradrim and completed about 40 models to tuck away in some quiet corner until they rise to do the bidding of their Dark Lord.  Among them was a Mumakil but the thing is much too big for my crap backdrop so it photographs terribly. 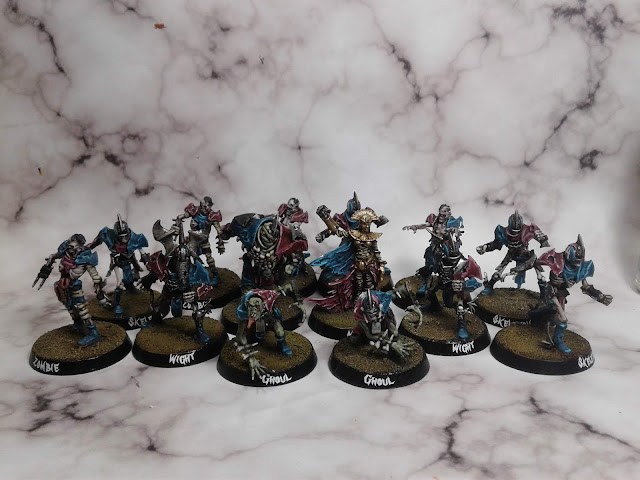 What is it with GW and unscheduled projects?  I had quite a number of dips into their specialist range this year and couldn't resist picking up an undead Blood Bowl team.  Not quite my favorite team but probably the best compromise for open league play these guys are resilient and for the most part easy to replace.  In a future article I'll cover the Mordheim Graverobbers in better detail. 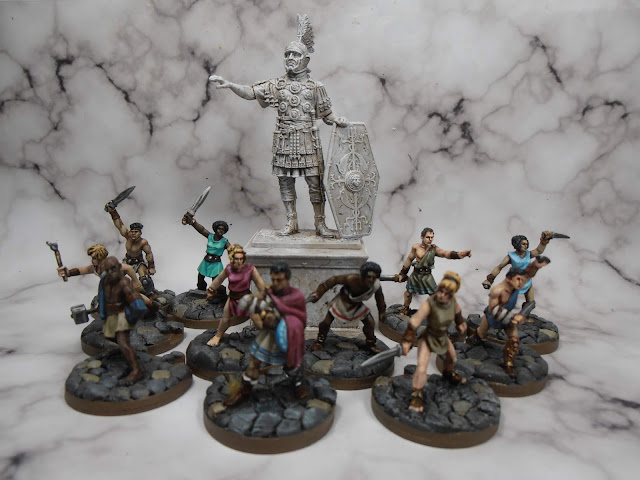 I also accomplished two personal hobby firsts this year.  For starters I put together a statue construction article for WarBanner.  It wasn't paid and I didn't get a fancy badge but I guess it was nice to to be "published" by someone other than myself.  Now when I'm playing at being a snotty douche I can pass myself off as a published writer.  On a more serious note I managed a sale of some miniatures on Ebay which got me to thinking.  Writing might not pay the bills but taking on some commission work might help a bit. 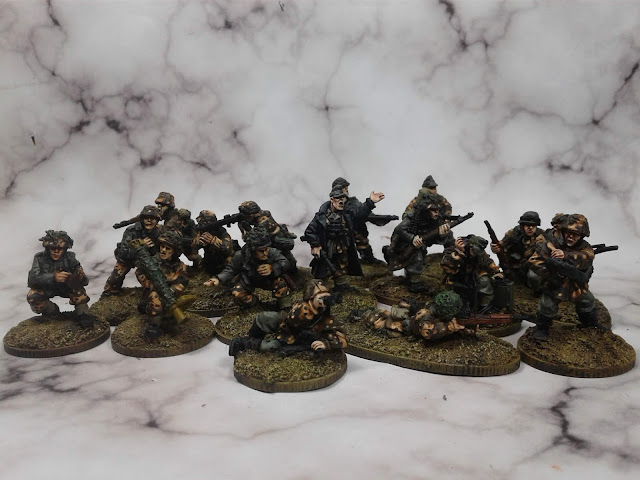 2018 was a pretty good year.  I didn't meet every goal I set but plans changed and things continued to move forward which is the most important thing for me in hobby.  Doing something is still something.  My idea of successful hobby is being involved and consistently doing things.  Hobby plans and outlines are good as guidelines but if things aren't working out it's better to move on than watch putlocker and wish the stuff on the bench didn't suck ass.  These Bolt Action SS miniatures were another late addition to the painting queue.  Stay tuned and all will be explained in 2019!
musings painted models Year in Review 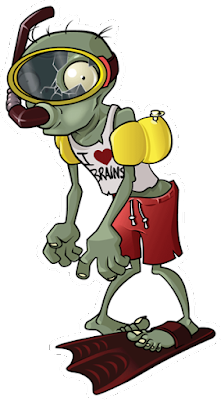 Hello.  It's been a while.  No I didn't have a hobby meltdown that saw me breaking my brushes and employing my number sevens Roman bath style.  I have dropped the ball something terrible concerning my blogging commitment for the year but feel little guilt for it.  Maybe I'm not one for the numbers and they are poor motivation.  It could be that I have regularly been posting WIP and finished projects across alternate media platforms.  Facebook groups remain and easy way to indulge my habit of alternating different "flavor" projects, and there is Instagram.  Honestly I hate that platform and rarely remember to upload pictures.  I hate the interface too but that's another story.


Guilt is a wonderful spur.  When I say I will do something I like to think I'm a man of my word and have to admit that I failed miserably in keeping it.  Too long ago I posted a shot of some dashboards I had ordered from Warped Mind Games on Etsy.  Some time before that someone had pr… 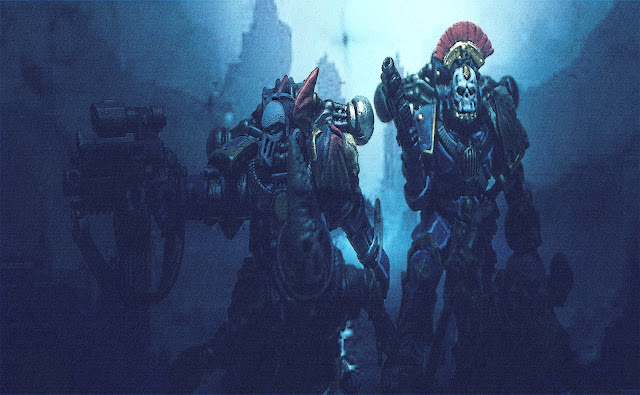 I recently offered to share how I paint the lightning effects on my Night Lord models.  It's always best to start something like this by saying there are many ways to accomplish this out there, this isn't necessarily the best, but it's what I like and it works for me so if you like you can give it a go and add it to your bag of hobby tricks.  Best practices usually end up in my possession by way of learning how someone else did something I like or doing something wrong enough times.  This freehand method owes to more than a few helpful teachers and all sorts of trial and error on my part. 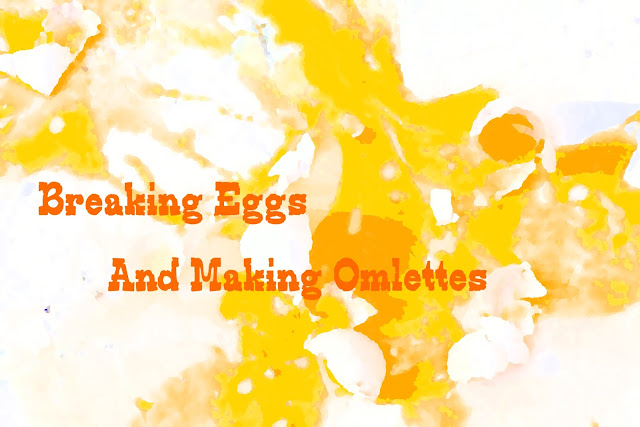 As I write this the sands are running low for another monthly blog quota.  February always come to a rather abrupt halt but this time around I was indecisive about what I wanted to share.  I could have easily run up the contents of the Here's Negan game, babbled about the armoured additions to my SS force, or done a reasonable report on Blood Red Skies because I had some fun painting up some pretty cool little planes.


Instead I dispensed with all things enjoyable and decided to ramble about something I dislike and have a great deal of difficulty with.  Organization.  I don't remember when I posted my my diatribe on organization but I remember sharing the concept of an organic workspace;  One that "grows" and is shaped by tasks undertaken.  A busy bench can be messy but even the most organized hobby space is going to shift over time as the owner branches into unfamiliar territory.